These 5 campaigns got email right

With a cluttered medium like email, it can be extremely difficult to make any kind of noticeable splash. In fact, there’s quite a bit of struggle to even encourage recipients to open emails, so when an email marketing campaign is able to inspire results like social conversation, high click through rater and even revenue, it is something to behold.

With recent changes to inboxes forcing marketers to adapt, as well as premature declarations of the medium's demise, it's understandable that some have moved beyond email. The inbox, however, is a powerful tool that shouldn't be overlooked, and these five campaigns are a prime example of that.

1. LINKEDIN: TOP 1% EMAILS
Why it was great: It got people talking 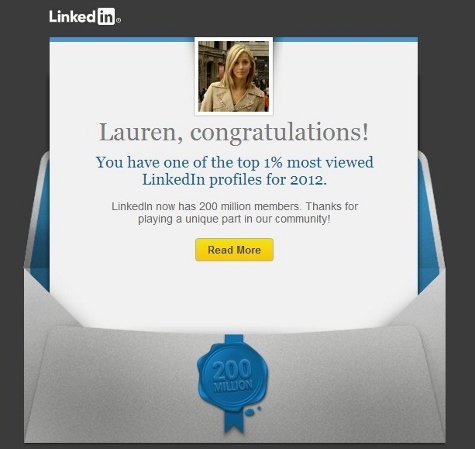 Earlier this year, LinkedIn sent out emails to users congratulating them for being in the top 1%, 5% or 10% of users. The emails looked like the one featured below and sparked a massive response across social media, which seemed to be LinkedIn’s intent.

The first wave of social media commentary came from those who had received the emails. If users clicked through the email’s “Read More” button, they were encouraged to share their status on various social media outlets — and share they did. The second wave of social conversation came after users started doing the math. Even if you were in the top 1%, 5% or 10% of users, you were still among 2 million, 10 million, or 20 million users, respectively. There was a slew of negative posts after users started to realize this fact.

You can argue whether or not the campaign was a success, but you can’t argue that it sparked a serious viral fire.

2. VERTICAL RESPONSE: GROUPON-STYLE EMAIL
Why it was great: The email generated $18,000 in revenue 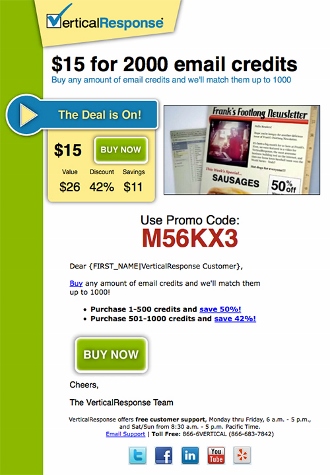 It should come as no surprise that an actual email marketing firm made the list. Vertical Response made its big splash by taking a cue from daily deal provider Groupon.

The firm sent out a Groupon-like email offering discounts on email credits, which are used by customers for email newsletters. With credits up to half off and Vertical Response's promise to match the credits up to 1,000, the email created additional urgency with a countdown timer.

The deal was too good to pass up and ended up generating $18,000 in revenue. That’s an impressive ROI on one email.

3. CHARITY WATER: GET TO KNOW THE PEOPLE OF RWANDA
Why it was great: It told an engaging story 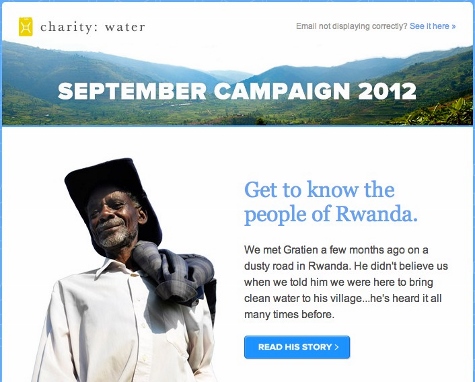 Rather than the “buy now” or “visit the site” buttons so common in marketing emails, there is only a “Read His (or Her) Story.” For an organization like Charity Water, they couldn’t have picked a better tactic to get recipients to care about their cause. The email put a face to the problem and included visually stunning images to connect to recipients.

4. BRAIN PICKINGS: EMAIL NEWSLETTER
Why it was great: It broke email rules because it knows its audience

Like so many things in marketing, there are industry-understood sets of “rules” for many tactics. Email marketing has not escaped this. One such rule is to keep emails short and to the point. The idea is that readers want to be able understand the email’s point as quickly as possible.

But rules were meant to be broken in the case of discovery website Brain Pickings. Their email newsletters are often extensive, offering an array of interesting ideas for readers. The reason Brain Pickings can get away with this is because it truly understands its readers. The site’s audience is interested in Brain Pickings because it’s a wealth of information in one place, not in spite of it.

5.  AT&T: ADD A LINE PROMO
Why it was great: The call to action fit the audience 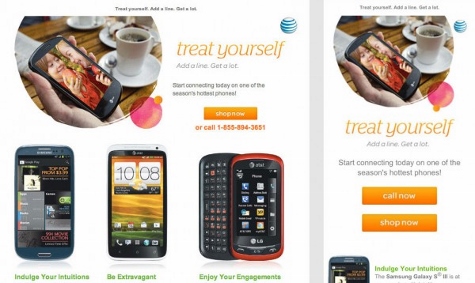 Remember how we mentioned the call to action before? In this case, mobile provider AT&T nailed it right on the head. In the side-by-side comparison of desktop and mobile emails, one can see that AT&T really understand how to optimize an email for mobile.

In the mobile version of the email, AT&T includes a button labeled “Call Now.” This simple addition shows just how much the brand understands mobile users, who can appreciate the option for a phone call from their devices rather than trudging through a site to find more information. Plus, it just recognizes that the user is on a mobile phone while reading the email. This kind of customization shows recipients that AT&T is cognizant of their needs.

Would you like to see more marketing industry news and information like this in your inbox on a daily basis? Subscribe to our Marketing Dive email newsletter! You may also want to check out Marketing Dive's look at 5 trends that will continue to shape marketing in 2014.

View all | Post a press release
B Lab Global Announces 2022 Best For The World B Corps
From B Lab Global
Canto Announces New Hootsuite, Wrike Integrations to Streamline Digital Content Supply Chain
From Canto, Inc.
Lack of Real-time Analytics, a Pressing Challenge for Marketers: MoEngage Report
From MoEngage
Qonsent and Givsly Bring Performance Giving to Marketers
From Qonsent
Editors' picks
Latest in Mobile
© 2022 Industry Dive. All rights reserved. | View our other publications | Privacy policy | Terms of use | Take down policy.
Cookie Preferences / Do Not Sell