Native advertising, or ad material designed to look like editorial content, is controversial among publishers and ad professionals alike. Some advertisers love the practice because it draws attention to their content. Some publishers hate it because it blurs the lines between editorial and advertising, while other publishers are proponents because it means they can drive more revenue and depend less on ugly banner ads and the like.

It’s a complicated, evolving practice at the moment, but several brands are diving headfirst into the new trend. When these brands really nail it, it can be a sight to behold. Take a look at how these five brands got native advertising right.

​An article about native advertising has to include at least one BuzzFeed example. The publisher is pretty much building its revenue model around native placements like Nestea's "19 Things Every Garden Party Should Have" and “14 Things to Do Before Summer Ends.” The soft drink's BuzzFeed content is a great example of creating something that fits naturally into the publication while also keeping in line with brand image.  ​ 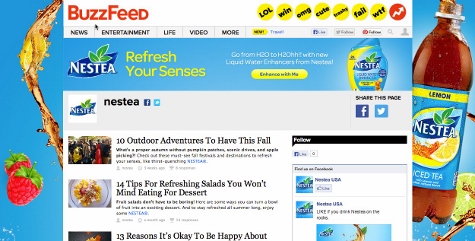 Purina’s sponsored article on Mashable, “5 Heartwarming Stories That Prove Dog Is Man's Best Friend,” is an uplifting piece that quickly spread on social media. The piece offers some tear-jerking examples of canines doing extreme things that show loyalty to their owners. Since going up in March, the piece has been shared nearly 3,000 times on Facebook and tweeted over 1,000. 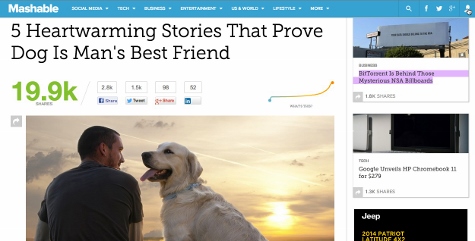 Say Media struck a native advertising deal with Maybelline for sponsored posts on xoVain to promote the new BB cream product. What’s great about these posts is that they are wholly transparent and offer real feedback about the product. A main issue among native advertising's critics is that the posts are written to seem like they are not advertising, thus deceiving the reader. If you remove all doubt that the posts are advertising, and you provide valuable content, readers will generally be happier to read sponsored content. 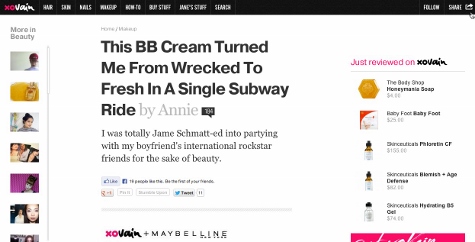 Sony sponsored the “How Pixar Unlocks Imagination With Technology” piece with The Atlantic’s marketing team. The spot includes a pre-roll Sony ad in front of a four-minute video about technology in animation. The video is informational and entertaining, while very obviously promoting the brand. Accompanying the video is a written article explaining a bit more about the process of creating the feature film Monsters University. 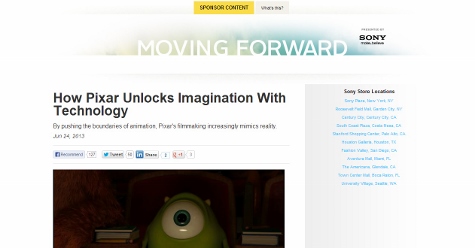 GE Capital and Slate teamed up to take native advertising and turn it into an entire event. The partnership created the “2013 Roadshow for Growth,” traveling to 20 different cities over six months. The physical road show is being documented on a page built on Slate, Roadshow.Slate.com, where content is uploaded daily. The infographic below is one example of useful and amusing content on the page.

Would you like to see more marketing industry news and information like this in your inbox on a daily basis? Subscribe to our Marketing Dive email newsletter! You may also want to check out Marketing Dive's look at 3 speakers who stole the show at Advertising Week.

View all | Post a press release
The Paper Store Fuels Expansion Strategy
From The Paper Store
B Lab launches Forces for Good, a new podcast
From B Lab Global
AliExpress Launches Campaign Introducting US Consumers to the World's Largest Marketplace - Ad…
From OKRP
The Agile Brand Guide to Customer Journey Orchestration by Greg Kihlström is the latest in the…
From The Agile Brand
Editors' picks
Latest in Data/Analytics
Industry Dive is an Informa business
© 2022 Industry Dive. All rights reserved. | View our other publications | Privacy policy | Terms of use | Take down policy.
Cookie Preferences / Do Not Sell