In just a handful of years, the young entrepreneur launched an app that's now one of the most popular social platforms in the world. 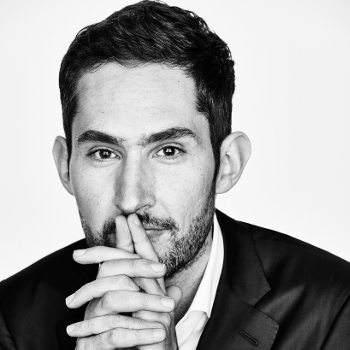 Our goal is to not just be a photo-sharing app, but to be the way you share your life when you're on the go.

Systrom learned the mobile game early on. He studied at Stanford and previously held gigs at Google and what's now Twitter, but he rose to fame when he launched Instagram — and then sold it to the world's largest social media company, Facebook, for $1 billion just two years later.

At 33 years old, Instagram CEO and founder Kevin Systrom has already interned at what's now Twitter, worked at Google, launched and sold a social platform to Facebook and been placed on Forbes' list of "America's richest entrepreneurs under 40."

Clearly, he's got a knack for the mobile business.

Under Systrom's leadership, photo-sharing app Instagram has become one of the fastest-growing startups, with 800 million monthly users and a new advertising model that eMarketer estimates will generate $6.84 billion in U.S. ad sales by 2019. And, in a short period of time, it's amassed a huge user base that includes some of the world's most well-known public figures, from Pope Francis to presidents.

With past gigs at Twitter and Google, and now as the head of a distinctly mobile-first platform owned by the world's largest social media platform, Systrom consistently displays an understanding of mobile that few others in the space do, ensuring both he and Instagram stand out among the industry's fiercest competitors.

It all started back when then-Stanford student Systrom built web programs in his spare time, including a photo site that his fraternity brothers used to share party pictures internally. Just before his senior year, he interned at Odeo, a startup that would later become Twitter, and worked with two of Twitter's cofounders, Evan Williams and Jack Dorsey. He then left for a marketing gig at Google, and three years later, went his own way to create an image-sharing mobile app with fellow Stanford alum Mike Krieger.

Systrom and Krieger understood that simplicity was key. With that in mind they created an easy-to-use mobile interface tailored specifically to the iPhone, whose latest models featured high-quality built-in cameras, adding to the mobile element of what would become Instagram. The iPhone 4 had just been released and sold more than 1.7 million units in its first three days, so the duo aimed to ride that booming product launch wave. In eight weeks, Systrom and Krieger had tweaked the app, integrated various filters (today, there are more than 20 filters to choose from) and come up with a name based on the idea of "instant telegrams."

On Oct. 6, 2010, Instagram went live. Two hours in, it crashed from the traffic rush. But within the 24 hours after it was back online, nearly 25,000 people had signed up for an account, and 7 million did so within the next nine months. Fast forward two years to 2012, and Facebook offered to shell out $1 billion for the platform. Five years later, "to Instagram" is its own verb.

One factor that some analysts say has been key to Instagram's success is Systrom's ability to scale the app while sticking to his and Krieger's original principle of simplicity. In contrast to its parent company Facebook, which became more multifaceted over the years with constantly evolving tools and features, Instagram kept things relatively the same. It's added more filters, made it easier for users to integrate posts with other social apps and established a monetization model through sponsored photos that appear in users' stream. But overall, the functionality of the app hasn't dramatically changed from what it was when it launched, which some say has let consumers shape where Systrom's social platform is headed — not the other way around.

Instagram has added features like Stories, filters and Superzoom camera effects. But while social sites grow increasingly multifaceted and complex, Systrom believes apps should stick to a relatively simple model that can shift with its users' changing preferences.

View all | Post a press release
cleansheet goes global to promote UNESCO’S MGIEP World Kindness Day
From cleansheet communications
Retention Cloud Leader CleverTap Names Former Freshworks CRO Sidharth Malik as Global CEO
From CleverTap
Pitcher Celebrates Ten Years of Simplifying Sales Enablement for B2B Teams
From Pitcher
Annual Study Reveals Rising Stars Among The World’s Global Companies
From TEAM LEWIS
Editors' picks
© 2021 Industry Dive. All rights reserved. | View our other publications | Privacy policy | Terms of use | Take down policy.
We use cookies to optimize your experience on our website and for analytics and advertising purposes. By continuing to use our site, you agree to our cookie policy. Learn more
Accept