What strategies result in the most retweets? It’s a question that social media and marketing strategists have had to confront since the Twitter featured launched in 2009. There is a variety of information on the topic available online, but it can hard to know what is substantiated in data and what are little more than guesses.

To provide a definitive guide on the topic, marketing analytics and data firm TrackMaven conducted a study of 1,423 Twitter accounts and analyzed 1.7 million tweets. The results of that study — "The Retweet Report” — offers a wealth of information on how to get the best results on Twitter..

One of the most interesting findings is that the volume of tweets posted did not fall in line with the number of retweets. For example, the most popular days of the week to tweet were in the middle of the week, with Thursday having a slight lead; 17.4% of tweets happen on that day.

The tweets with the highest retweet rate however, were those sent out on Sundays. Tweets posted Sunday averaged 0.168 retweets. 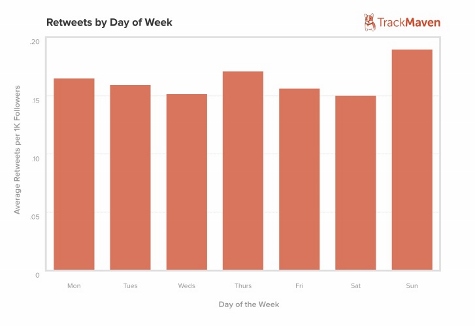 2. Schedule tweets for later in the evening

As with the days of the week, the time of day with the highest volume of tweets did not coincide with the time when chances of being retweeted were best. Tweet volume usually peaked around noon each day, with 8.01% of daily tweets being posted between 12 and 1 p.m. Most retweets, however, happened between the hours of 10 and 11 p.m., with those posts having 0.194 shares on average.

3. Don't shy away from the hashtag

Hashtags are a bit under-appreciated. At first, Twitter users thought they were great, and marketers soon latched onto the concept because they wanted to increase their reach on the platform. Like so many things in marketing, a few marketers went a bit overboard and hashtags received a reputation for being overused. 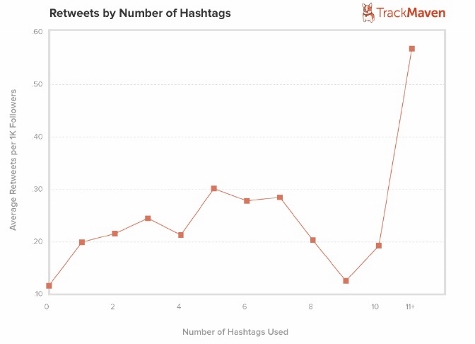 As one might expect, mentioning another user in a tweet will increase its odds of being retweeted, usually by those mentioned in the tweet. With each mention, the chances of a retweet increase, but top out at six mentions per tweet. A tweet with six mentions will be retweeted, on average, 0.190 times. The likelihood may decrease after six because of the spammy feeling of tweets with too many mentions.

5. Put your links in the right place

The position of the link within a tweet probably isn't something most Twitter users have top-of-mind. Tweets have sort of evolved into a standard format of text first, then link — with a few exceptions. Rarely, for example, will you see a tweet that leads with the link.

That standard format may be the reason tweets with the link positioned at 90% of way through the tweet perform the best. Tweets with this link position will receive 0.2 retweets on average. 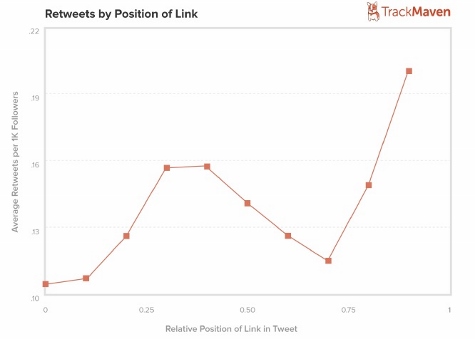 As is true with most medium online, photos increase a tweets chances of being retweeted. This is something Twitter founders may not have anticipated in the early days when Twitter success depended on the fact that it wasn’t overloaded with images, but not Twitter has image-heavy Pinterest and Tumblr to compete with.

Tweets that include photos are retweeted over three times as often as those with no photo. Photo included tweets are retweeted an average of .0404 times while photo-less tweets are only retweeted 0.133 times. The recent feature change from Twitter that automatically shows photos within the timeline, without having to expand the tweet, has increased the power of the photo even more. After the feature change, tweets with photos were retweeted 0.496 times on average.

Counterintuitive to the Twitter mantra of "less is more," tweets spelling out the word “retweet” actually received more retweets than those with the RT abbreviation. Using "retweet" in full nets 1.88 retweets on average.

Other words will make a difference in retweets, as well. The word “please” will grab around 0.32 retweets, and the word “now” averages 0.17 retweets. 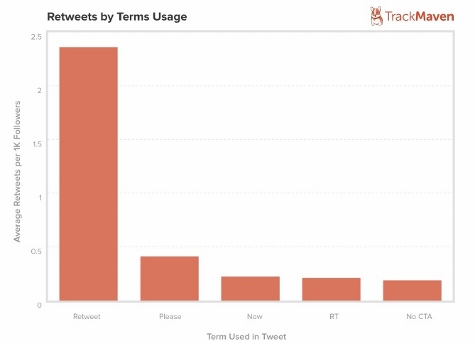 The more enthusiasm — which might seem like overkill to some — the better. Nine exclamation points, for example, resulted in an average of 0.484 retweets.

Tweets written in all capital letters, or at least partially so, are retweeted more often than those in lowercase. As with the exclamation points, this suggests that a tweeter's inferred enthusiasm plays a role in fostering retweets. All caps tweets are shared 0.8 times on average, compared to the 0.147 for those mostly in lowercase. 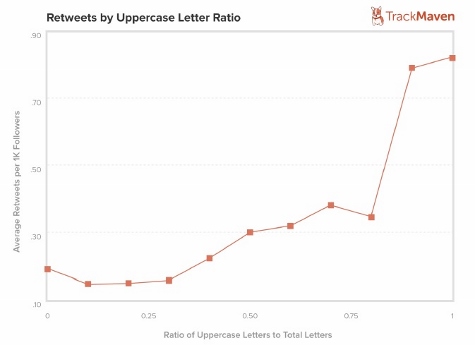 Yes, there is a relationship between your number of followers and number of retweets, but that doesn’t necessarily mean more followers equal more shares. Within the lower numbers of followers, the relationship is much closer, but the findings are different when you start looking at outliers like Justin Bieber and Barack Obama.

Bieber and Obama both have tens of millions of followers — 46,802,957 and 39,613,288 respectively. Their average retweets don't fall in line, however. On average, a tweet from Justin Bieber will inspire 67,676.97 retweets on average. Obama’s tweets, on the other hand, will result in only around 1,836.18 retweets, even though their follower numbers are similar.

Would you like to see more marketing industry news and information like this in your inbox on a daily basis? Subscribe to our Marketing Dive email newsletter! You may also want to check out Marketing Dive's look at 5 B2B holiday campaigns that hit the mark.