Nearly 11 months after making a high-profile speech demanding a better digital media ecosystem, the executive's words and actions continue to reverberate through the industry. 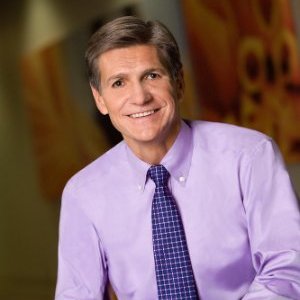 When the largest advertiser in the world steps up and says, okay, here's the issues we see and here's then the actions steps we are going to take, I think it really just opened up the floodgate for real movement.

Pritchard has been with P&G since 1982, working his way up through the ranks from cost analyst and brand manager to assume the role of chief brand officer in 2014.

Issued an ultimatum to the digital marketing ecosystem to clean up its act or P&G would take its money elsewhere.

This is Pritchard's second time as Marketing Dive's Executive of the Year. In 2016, he won for bringing attention to issues with overly-narrow targeting and agency business practices. In 2017, his activism reached new heights.

As chief brand officer of a consumer packaged goods giant that is home to stalwart brands Always, Tide and Charmin, Marc S. Pritchard is accustomed to be taken seriously by marketing industry insiders. But even he was surprised by the way his speech at the Interactive Advertising Bureau's Annual Leadership Meeting in January resonated, Pritchard explained in an in-depth interview with Marketing Dive last month.

Nearly 11 months later, the executive's demands for a digital ecosystem that better meets the needs of advertisers and consumers — demands backed up with a threat to take the company's spending elsewhere if several key issues weren't addressed — are still reverberating through the industry.

"When the largest advertiser in the world steps up and says, okay, here's the issues we see and here's then the actions steps we are going to take, I think it really just opened up the floodgate for real movement," Pritchard said.

Pritchard has been known to throw his weight around before. Marketing Dive named him Executive of the Year in 2016 for bringing attention to issues with overly-narrow targeting and agency business practices. In 2017, though, his activism reached new heights as he spurred marketing leaders to move on a series of issues that had been around for years without any consensus on how to address them. This is why Marketing Dive has named Pritchard Executive of the Year for a second time.

In comments to Marketing Dive, Pritchard attributed much of the impact of his speech to timing — digital marketing had recently become the largest marketing area by spend, resulting in greater scrutiny of it by marketers, he explained. But this fails to take into account his own image as a well-liked and fair business executive, characteristics that ensured the message would be closely listened to.

And that it was. In the months after Pritchard's speech, major platforms like Facebook and Google, as well as smaller ones, responded by pulling back the covers on their metrics in a way they hadn't previously done and allowing third-party monitoring. The executive's words also buoyed the confidence of other brand marketers, letting them know they weren't alone in being unhappy about the status quo and paving the way for companies like Unilever and JPMorgan Chase to step back some efforts while issues are being addressed. P&G also walked back its digital investment, in part in response to concerns around programmatic inefficiencies and brand safety issues.

Throughout the year, Pritchard continued to push for a cleaner digital media ecosystem when new issues popped up, like revelations around ads on YouTube appearing next to inflammatory content. He also kept a close eye on the progress being made, telling Marketing Dive recently that nearly everybody has stepped up on transparency, anti-fraud activities and brand safety. The last remaining step is getting accredited by the Media Rating Council — a step that is in progress or already completed for most, meaning P&G isn't likely to see a need to follow through on the threat of removing investments from platforms that haven't met its criteria.

"At the ANA, when I spoke, we were about two-thirds of the way done," Pritchard told Marketing Dive. "By the end of the calendar year, I think we'll largely be done with those key action steps."

Pritchard's high-profile attempts to lead the digital marketing industry forward come at a time when P&G is facing lackluster sales and claims that it has been slow to embrace digital transformation. The company could be stepping up efforts to address the latter by recently luring away Coca-Cola's chief technology officer. If a stronger digital media ecosystem combined with more internal innovation lights a spark under P&G's sales, next year could find Pritchard once again receiving recognition for his leadership.

With transparency improving, Pritchard insists content is the next area of digital media that needs work as right now too many sites have low-quality content. "That's probably the area where the bar needs to get raised pretty significantly," he said.