Marketing analytics and data firm TrackMaven on Wednesday released the most comprehensive study to date of how Fortune 500 companies are using Instagram. Based on the current Fortune 500 list, the study tracked the behavior of firms using Instagram, including their active users, follower numbers, interactions and more.

This comprehensive study provides a great portrait of how Instagram is being adopted by Fortune 500 firms—​but even better, it offers lessons for all brands on how to best use the platform.

Here are five key takeaways from the report:

Of the Fortune 500, 123 companies have an Instagram account. While this isn’t as high a percentage as Facebook or Twitter, Instagram has certainly proven its worth for many of the firms. Those ranked 1 through 100 on the list have the highest adoption of Instagram among the group at 25%. In fact, the lower a company ranked in the list, the less likely they were to have an active Instagram account. For example, only 10% of the companies ranked 301-400 were actively using the platform. While we can’t draw a directly correlation, it is worth noting that the most successful companies use Instagram. 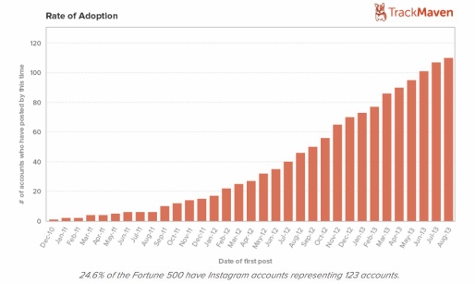 When Instagram revealed its 15-second video feature, it received a ton of buzz in the media. Overall, video seems to be making an impact, but photos still receive 37 interactions for every 1,000 followers, compared to 24-per-1,000 for videos. Fortune 500 companies have been slow to adopt the feature, as well, with only 74 videos shared in the past 30 days. In that same time period, the companies shared 1,792 photos. This helps support the claim that Instagram is still a photo sharing site at its core. 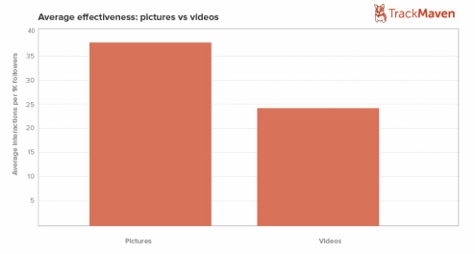 What days and times are the most effective for posting on Instagram? According to the TrackMaven study, when they looked at the normalized effectiveness—meaning the number of interactions per 1,000 followers—there was very little difference in interactions on any given day. There was a slight increase on Mondays and a small dip on Saturdays, but nothing to really be concerned with.

The time of the day didn’t seem to matter either. The difference in interactions only varied up to 6% from peak-hours to off-hours. Every audience is different, but with Instagram, the day and time photos are posted doesn’t seem to matter as much as other social networks. 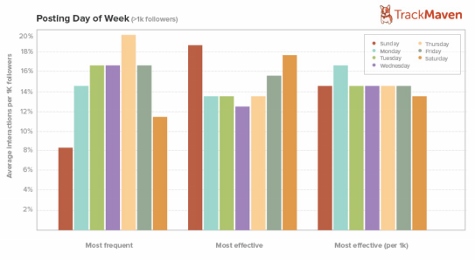 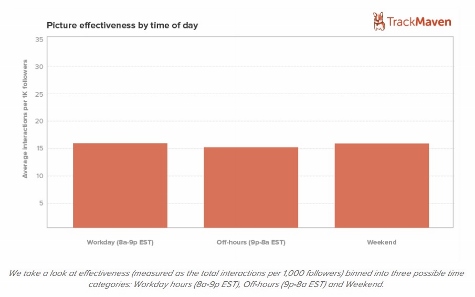 4. Use the Mayfair filter.

Most often, Fortune 500 firms choose to forgo the Instagram filter function for their photos, but that may not be the best way to inspire interactions. According to the study, photo posts that used the Mayfair filter received the most interactions. Mayfair filtered posts received on average about five more interactions per 1,000 followers than photos that had no filter at all ,and about seven more than the next most popular filter, Inkwell.

5. Be generous with hashtags.

Maybe one of the most surprising findings of TrackMaven's Fortune 500 study is the effect that hashtags have on Instagram posts. There was a steady increase of interactions with each hashtag added, up until five hashtags. After five hashtags, the interactions began to decline again. Among firms with less than 1,000 followers, the study saw a huge spike in interactions with over 11 hashtags. This finding is just another reminder that Instagram is a social discovery app, not just a place to broadcast messages, and these brands were likely being discovered because of their heavyhanded hashtagging. 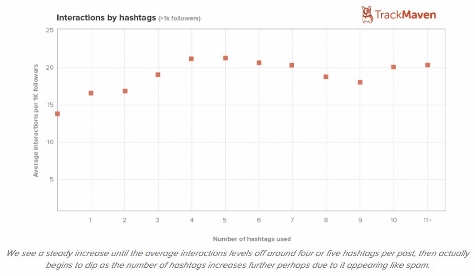 Would you like to see more marketing industry news and information like this in your inbox on a daily basis? Subscribe to our Marketing Dive email newsletter! You may also want to check out Marketing Dive's look at 5 brands tapping Snapchat's potential.

View all | Post a press release
B Lab launches Forces for Good, a new podcast
From B Lab Global
AliExpress Launches Campaign Introducting US Consumers to the World's Largest Marketplace - Ad…
From OKRP
The Paper Store Fuels Expansion Strategy
From The Paper Store
BylineBuddy Launches From Stealth, Promises to Disrupt Global Thought Leadership Marketplace
From BylineBuddy
Editors' picks
Latest in Social Media
Industry Dive is an Informa business
© 2022 Industry Dive. All rights reserved. | View our other publications | Privacy policy | Terms of use | Take down policy.
Cookie Preferences / Do Not Sell